A Brief History of Ancient Circumcision

This weeks parsha begins with Avraham sitting in front of his tent after he recovers from his circumcision, mentioned at the end of last weeks parsha. It also presents the first mention of ritual circumcision on an 8 day old infant, with the circumcision of Yitzchak (Isaac). Therefore, we will spend this weeks post discussing circumcision.

This post will talk about the ancient origins of the practice. While I definitely have opinions on the moral aspects of circumcision, I will refrain from discussing them here. This post will produce a lot of speculation on the evolution of the procedure, which is hard to avoid, since there's so little information, biblical or otherwise to go on.  But I will present everything I've dug up.

A common argument for Judaism is that the religion has so many bizarre and burdensome commandments, that it would be hard to convince people to uphold them if there wasn't a really good reason, such as a divine revelation of said commandments. However, this argument tends to fall apart for most of the commandments that it's used for, mainly because there's evidence of origins for the practice that began in other cultures in earlier times.  So at the very least, it doesn't take a divine commandment to get people to do it.  Presumably the other cultures who performed the same bizarre rituals didn't also receive a Torah from God outlining the practices. Circumcision is one of those commandments.  It's often upheld as a practice that would be impossible for a religious charlatan to convince a population to do.  Therefore, the argument goes, it could not have been invented by man, and must be divine.  However, as we'll see in a moment, circumcision existed in a nearby culture to the Israelites, much earlier than any date offered for Avraham in Egypt.

David Gollaher gives a rundown of what we know about the Egyptian practice in his book "Circumcision - A History of the World's Most Controversial Surgery."  Most of the book deals with modern practice, which is of less interest to us this week.  But the beginning of the first chapter discusses some of the ancient history.  Gollaher says that the earliest reference to circumcision comes from a relief in the necropolis at Saqqara and dates to 2400 BC. An image of the relief is reproduced below. 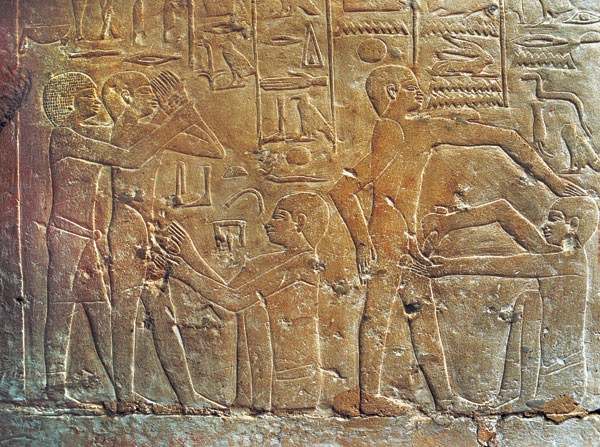 Relief of necropolis at Saqqara [1].

Among the text is written in hieroglyphics: "Hold him and do not allow him to faint (left image)". and, (circumcisee to circumciser) "thoroughly rub off what is there" [2]

Later textual descriptions of circumcision in the 23rd century BCE has an Egyptian describe himself being circumcised along with 120 other people. Furthermore, X-ray scans of mummies indicate that circumcision dates back all the way to the 4th millenium BCE.  The purpose of Egyptian circumcision is unclear. It is possible that it was restricted only to the elites. Gollaher conjectures that a likely purpose of circumcision is to eliminate the production of smegma, and restore a natural orderly flow to the body's fluids, an obsession of ancient Egypt religious ideas [3].

It is important not to read too much into an Egyptian/Israelite connection of the ritual.  For one the length of time between our Egyptian sources and the Israelite ones is very long.  Redford, an expert on Egyptology and it's relationship with Canaanite culture, does not include circumcision in the list of Israelite practices that were derived from Egypt [4].  Rather the point is merely that there were people who practice circumcision with presumably no prompting from God.  This allows for a precedent where the Israelites could also have done the same.  Whether it originated in Egypt, Israel, or native is superfluous to the main point.

Circumcision in the Torah

Unraveling the history of circumcision in the Torah is fraught with difficulties. It is a very bizarre commandment, in that it is only mentioned as a positive commandment in Genesis, and the other mentions of it are in either metaphorical terms, such as circumcising one's heart (Deut 10:16, 30:6) or in agricultural terms (Lev. 19:23-25). Additionally, while not mentioning the words for circumcision itself, the Torah marks that uncircumcised people cannot partake in the Pesach (Passover) offering (Ex. 12-48).  Lastly, there's the account of the sons of Yaakov (Jacob) convincing the population of Shechem to circumcise themselves so that the heir to the throne can marry their sister, and then summarily slaughtering them all (Gen 34).

The passage in Genesis (17:14) in last week's parsha states:


"And the uncircumcised male who is not circumcised in the flesh of his foreskin, that soul shall be cut off from his people; he hath broken My covenant.

In addition to the above references, there is one very confusing passage about circumcision in Exodus 4:24-26 that deserves special mention.


24 And it came to pass on the way at the lodging-place, that the LORD met him, and sought to kill him. 25 Then Zipporah took a flint, and cut off the foreskin of her son, and cast it at his (whose?) feet; and she said: 'Surely a bridegroom of blood art thou to me.' 26 So He let him alone. Then she said: 'A bridegroom of blood in regard of the circumcision.'

This passage has led to many explanations both from Rabbis and academic scholars. The academic position is that this represents a very early account of circumcision in Israel. The idea being that circumcision is thought to have some salutary properties.  It is a way to ward off death or disease. In this way, we can posit a possible connection to the Egyptian ideas behind the practice.

The "bridegroom of blood" is very strange, as it's unclear when in the history of Israel circumcision was actually called this.  One suggestion is that the early Israelite culture performed circumcision as a prenuptial rite (in most cultures it's an adult thing, not a child thing), and that is the real origin of the phrase.  However, at this point, infant circumcision is already the norm, so the author needs another explanation for this phrase [5].

Another passage mentioning circumcision that could be argued to be early is from the book of Joshua.

Here we have a circumcision procedure done not to infants, but to adult men. Furthermore, there is the claim that circumcision was not practiced at all in the wandering of the desert.  Something very strange given the commandment that no one who is uncircumcised can partake in the Pesach offering, which certainly occurred in the desert (Numbers 9:6-8 for example). Later in the biblical chronology we see that circumcision is used as a distinction between Israel and other nations, most notably the Philistines.

Circumcision as a Cultural Marker

The practice continued in the same way in Israel until it became a clear cultural divide between them and various neighbors. Such divides are very useful for ethnic continuity, and as such, the procedure became central to the identity as Jews.  It's not clear when it started being performed on infants, but I would guess that it was established by the time of the exile, if not earlier. One of the important issues for the Babylonian exiles, and indeed Jews in the later Persian and Hellenistic periods, was the establishment of Jewish identity. In fact, circumcision gets the most attention during the Hellenistic period when it was considered a mark of shame for many Jews, so much so that they made themselves fake foreskins!  The book of  1 Maccabees (1:15-16) relates:


15 And they built a place of exercise in Jerusalem, according to the laws of the nations: 16 And they made themselves prepuces, and departed from the holy covenant, and joined themselves to the heathens, and were sold to do evil."

Here we see the power of something like circumcision as a cultural factor.  It's an inescapable mark on your body that automatically assigns you to a specific group, despite whether you want to be associated or not.  It's no surprise that all the branches of Judaism that have survived until this point consider this commandment to be extremely important.

Circumcision predated the biblical commandment by over 1000 years, and perhaps up to 3000.  It is a very old practice, and one with origins that are shrouded in mystery.  However, it is certainly not a divine commandment given only to the descendents of Abraham, as the Torah claims.  It is found to be practiced in earlier times by cultures not derived from him.

Later though, in Babylon, and under Persian and Greek control, circumcision was a key cultural marker.  It forced Jews to identify as Jews, unless you were able to craft a fake foreskin in order to properly assimilate.  It is still just as important today.

While I will eschew mentioning my own position of the morality of the practice, I will note that if the public view changes so that infant circumcision is considered highly immoral, Judaism will have a very difficult choice to make.  It seems inconceivable, to me at least, for Judaism to let go of this central practice.  But if the alternative is societal isolation?  It's hard to say.